The overarching purpose of the Nielson lab is to understand and treat trauma. Research projects in the Nielson lab utilize a multidisciplinary approach, merging the fields of neurobiology, psychiatry and informatics to identify more precise "bio-types" of trauma psychopathology than traditional diagnostic criteria, and potential novel targets for treatment. We use established and emerging machine learning methods with multi-modal data spanning across a diverse range of diagnostic categories for neuropsychiatric disorders. Our approach can be used to run hypotheses on in silico models to understand the complexity involved in these disorders. An advantage of such approaches is the minimization for the need to test hypotheses in animal models (in vivo). Dr. Nielson received an Early Stage Investigator (ESI) award from NIMH to apply these methods to large datasets from trauma-exposed patients to identify and validate dimensions of post-traumatic stress (PTS), relevant biological predictors, and precision treatment response trajectories.

Other areas of focus in the Nielson lab are dedicated to psychedelic neuroscience research and drug policy reform. Dr. Nielson has been collecting data through an anonymous online survey to assess benefits and risks of ayahuasca use in naturalistic settings to treat symptoms of trauma. Dr. Nielson is also conducting research into the neurological mechanisms of altered states of consciousness and their role in promoting neuroplasticity and wellness in healthy research participants. This work is funded by the newly created Psychedelic-Assisted THerapy (PATH) Fund through the UMN Foundation, which was created thanks to a generous donation from the local community. These, and other data, are part of a larger network of data supporting the potential for psychedelic therapies and experiences to promote wellness across a diverse range of mental health disorders (see network below).

Donate to the PATH Fund!

Recent efforts to optimize diagnosis and treatment planning for psychiatric disorders through the Research Domain Criteria (RDoC) and ongoing clinical trials have generated large datasets housed in the NIMH Data Archive (NDA). The NDA is a valuable resource for data-driven discovery in mental health research. Data across multiple units of measure from a wide array of disorders are housed in the NDA. We will mine data from the NDA to characterize biotypes that span across diagnostic categories, and the complex constellation of symptoms and functional deficits that can be measured in individual patients.

4) Data from an anonymous online survey to assess the therapeutic uses of the plant medicine ayahuasca.

7) De-identified data from the The National Survey on Drug Use and Health (NSDUH).

The figure below illustrates a data-driven hypothesis that was found regarding functional decline in patients with PTSD following traumatic brain injury (TBI). Using a machine learning method known as topological data analysis (TDA), a gene involved in DNA repair was uncovered to have predictive value on functional outcome trajectories in a subgroup of patients with co-morbid PTSD and mild TBI. 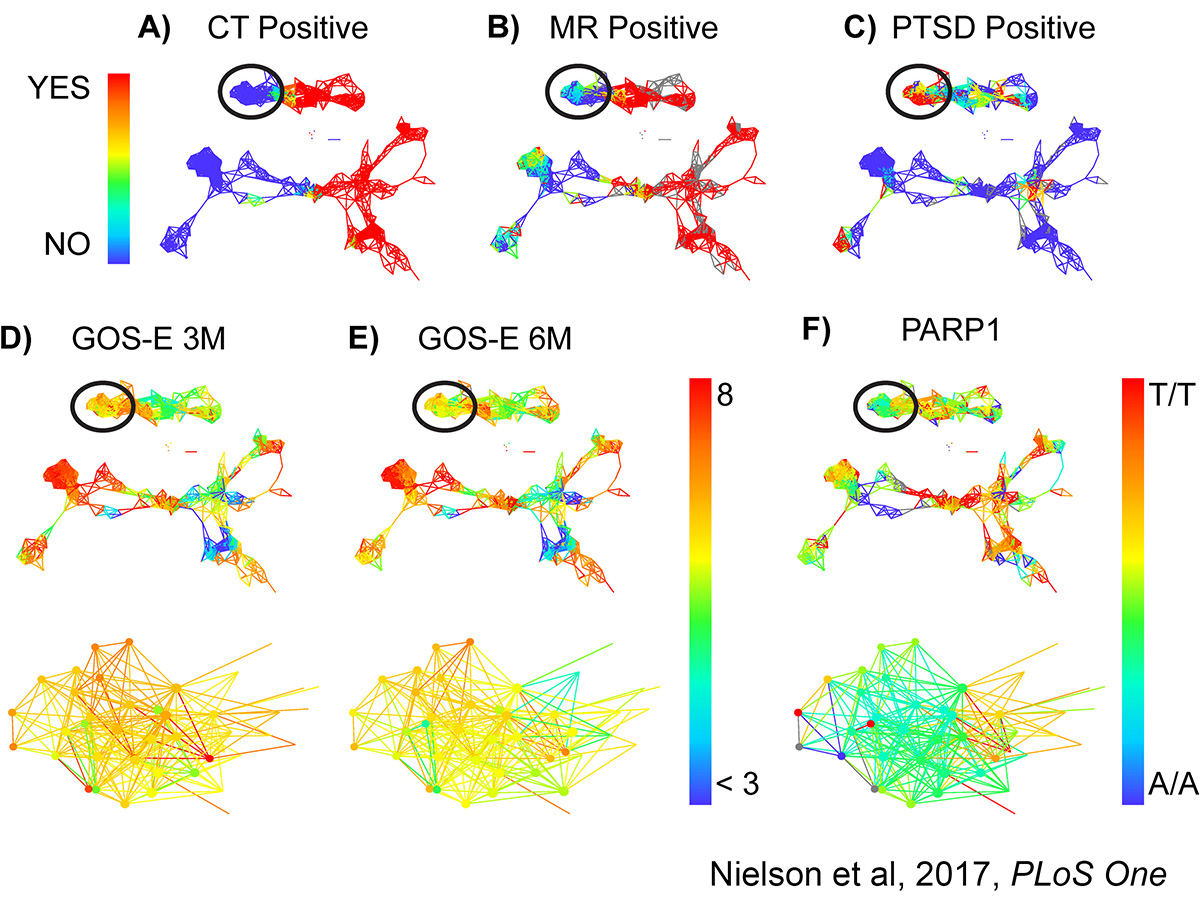 Figure Legend. Network topology of patients with traumatic brain injury differentiates severity of brain pathology measured by both CT (A) and MRI (B), where most patients with a PTSD diagnosis 6 months (C) after injury have little to no obvious brain pathology (circled nodes). Highlighted patients show a decline in function between 3 (D) and 6 months (E) after injury, which was significantly predicted by enrichment for the A/T genotype of the PARP1 SNP (F, green nodes), a gene involved in DNA repair. Published in Nielson et al., 2017, PLoS One.

Psychedelic research is undergoing a renaissance within the scientific arena, where an astounding volume of literature and data are emerging to support this new frontier in science and medicine. There is also increasing attention being paid in the popular press towards their therapeutic potential, including notable mediums like The New Yorker, NY Times, and Rolling Stone. Additionally, compounds such as MDMA and psilocybin have recently been granted breakthrough therapy designation by the FDA for PTSD and depression, respectively, making this area of research an exciting and innovate avenue for continued scientific exploration into their mechanisms of action.

Psychedelic research in my lab focuses on collecting data from completed and ongoing psychedelic research studies to develop an evidence base for drug policy reform and treatment planning, as well as to understand the mechanisms for how these compounds inform new models about information processing in the human brain. Current projects include analysis of data from an anonymous online survey of ayahuasca users in naturalistic settings, and investigating the role of the 5HT2A receptor on neural mechanisms related to visual perception and expectations.

The network below is a model of overlapping symptoms of trauma, and various psychedelic therapies that have published research (red numbers and reference list) suggesting a therapeutic benefit. 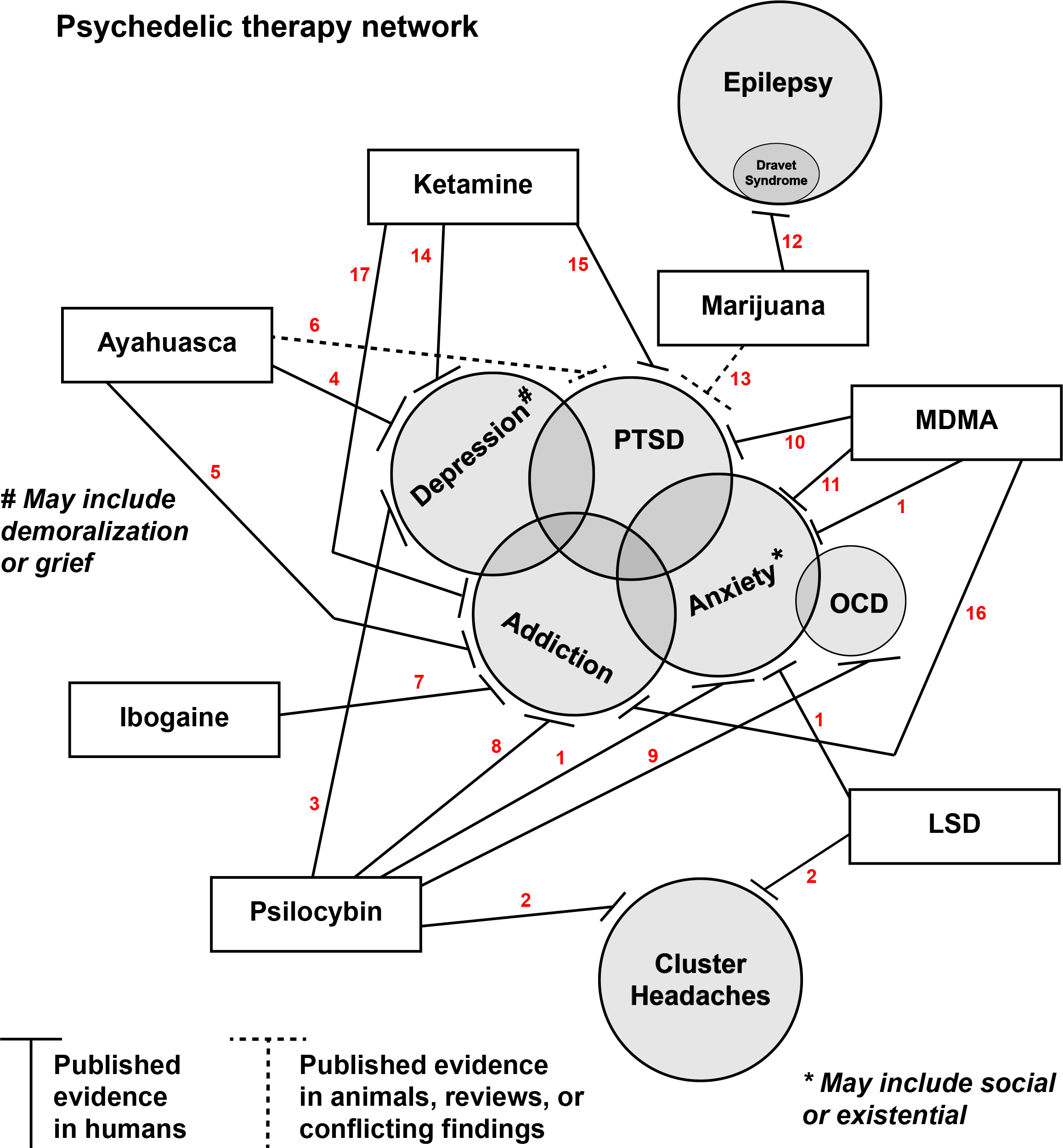 1. LSD, psilocybin or MDMA for end of life anxiety

Serotonergic hallucinogens in the treatment of anxiety and depression in patients suffering from a life-threatening disease: A systematic review

LSD-assisted psychotherapy for anxiety associated with a life-threatening disease: A qualitative study of acute and sustained subjective effects

Psilocybin produces substantial and sustained decreases in depression and anxiety in patients with life-threatening cancer: A randomized double-blind trial

MDMA-assisted psychotherapy for treatment of anxiety and other psychological distress related to life-threatening illnesses: a randomized pilot study

2. LSD and psilocybin for migraine and cluster headaches

Response of cluster headache to psilocybin and LSD

Indoleamine Hallucinogens in Cluster Headache: Results of the Clusterbusters Medication Use Survey

Exploratory Controlled Study of the Migraine-Suppressing Effects of Psilocybin

Therapeutic mechanisms of psilocybin: Changes in amygdala and prefrontal functional connectivity during emotional processing after psilocybin for treatment-resistant depression

Trial of Psilocybin versus Escitalopram for Depression

Antidepressant effects of a single dose of ayahuasca in patients with recurrent depression: a preliminary report

Antidepressant Effects of a Single Dose of Ayahuasca in Patients With Recurrent Depression: A SPECT Study

Therapeutic potential of ayahuasca in grief: a prospective, observational study

Rapid and sustained decreases in suicidality following a single dose of ayahuasca among individuals with recurrent major depressive disorder: results from an open-label trial

Ayahuasca-Assisted Therapy for Addiction: Results from a Preliminary Observational Study in Canada

Therapeutic effects of ritual ayahuasca use in the treatment of substance dependence--qualitative results.

Effects of Ayahuasca and its Alkaloids on Drug Dependence: A Systematic Literature Review of Quantitative Studies in Animals and Humans.

Ayahuasca as a Candidate Therapy for PTSD

Treatment of opioid use disorder with ibogaine: detoxification and drug use outcomes

Psilocybin-occasioned Mystical Experiences in the Treatment of Tobacco Addiction

Safety, Tolerability, and Efficacy of Psilocybin in 9 Patients With Obsessive-Compulsive Disorder

Cannabidiol in patients with treatment-resistant epilepsy: an open-label interventional trial

Trial of Cannabidiol for Drug-Resistant Seizures in the Dravet Syndrome

On Disruption of Fear Memory by Reconsolidation Blockade: Evidence from Cannabidiol Treatment

Cannabinoid modulation of corticolimbic activation to threat in trauma-exposed adults: a preliminary study

14. Ketamine for depression (in progress, many trials on this)

The Effect of Repeated Ketamine Infusion Over Facial Emotion Recognition in Treatment-Resistant Depression: A Preliminary Report

Intravenous ketamine infusion for a patient with treatment‐resistant major depression: a 10‐month follow‐up

Impact of oral ketamine augmentation on hospital admissions in treatment-resistant depression and PTSD: a retrospective study

Does oral administration of ketamine accelerate response to treatment in major depressive disorder? Results of a double-blind controlled trial.

Synaptic Loss and the Pathophysiology of PTSD: Implications for Ketamine as a Prototype Novel Therapeutic

Impact of oral ketamine augmentation on hospital admissions in treatment-resistant depression and PTSD: a retrospective study

First study of safety and tolerability of 3,4-methylenedioxymethamphetamine (MDMA)-assisted psychotherapy in patients with alcohol use disorder: preliminary data on the first four participants

First study of safety and tolerability of 3,4-methylenedioxymethamphetamine-assisted psychotherapy in patients with alcohol use disorder